A sailor, seaman, mariner or a seafarer is a person who navigates water bone vessels or assists as a crew member in their operation and maintenance.

Seafarer holds a variety of ranks and professions, each of which carries unique responsibilities which are integral to the successful operation of an ocean-going vessel. A common deck crew for a ship includes Captain / Master, Chief Officer/ Chief mate, Second officer/ Second mate, Able seaman, Ordinary seaman, Deck cadets etc. A common engine crew will include Chief Engineer, 2nd Engineer, 3rd Engineer, 4th Engineer (optional), Engine Cadet, Fitter, Motorman, Oiler etc. Other than this saloon staff will comprise of Chief Cook and General Stewart but the number and rank of crew members serving on a ship will vary according to the size of the vessel, trade area of the vessel, Minimum Safe Manning certificate, administration etc.

Seafarer generally receives remuneration in the form of salaries from the companies.

The taxability of salary received by a seafarer is based on the residential status of the seafarer.

The salary received by a resident seafarer will be taxable as per the laws of the Income-tax department. No special exemption is available.

The salary of a non-resident seafarer will NOT be included in the total taxable income of the seafarer.

An individual is said to be Non-Resident Seafarer if he is outside India for 184 days or more during the financial year (185 days or more in case of a leap year) for the purpose of employment. If he is not then he will be treated as a resident seafarer.

Calculation of period outside India

Rule Applicable for Voyages Start and End Outside India

Stamping dates in the passport is the basic criteria for calculation of the period outside India. Generally, passport dates are used when you join and sign off from ship outside India. However, dates of the CDC are the conclusive evidence at the time of scrutiny that you are outside India for the purpose of employment.

Use NRE DAYS CALCULATOR to find out your resident status

Rule Applicable for Voyages Start or End in India

However when you join or sign off from India then the CDC dates shall be used for calculation of period outside India.

(i) for the voyage having originated from any port in India, has as its destination any port outside India; and

(ii) for the voyage having originated from any port outside India, has as its destination any port in India.

HIRE US FOR FILING YOUR ITR

As per Circular No. 13/2017 issued by Central Board of Direct Taxes, salary accrued to a non-resident seafarer for services rendered outside India on a foreign ship shall not be included in the total income merely because the said salary has been credited in NRE account maintained with an Indian bank by the seafarer.

However, it does not mean if you have received a salary from an Indian flagship then it is taxable as above circular is silent in this case. The above circular is just a clarification issue by CBDT for a specific condition.

IN MY OPINION, IF YOU ARE A NON RESIDENT SEAFARER THEN THE SALARY RECEIVED SHALL NOT BE INCLUDED IN YOUR TAXABLE INCOME.

This amendment is only applicable on seafarer who is outside India for more than 184/185 days during the year and having Indian income of more than fifteen lakh. An amendment has been made by Financial Act 2020 which is applicable beginning from the financial year 2020-21 (01st April 2020 to 31st March 2021). The amendment has been made in Explanation 1(b) of Section 6 of the Income Tax Act. As per this amendment, an Indian origin seafarer, who has Indian income exceeding fifteen lakh during the financial year and is in India for more than 120 days but less than 181 days, shall be considered as a Resident in India. At the same time, another amendment has been inserted in Section 6(6) to consider the individual covered under this explanation as a resident but not ordinarily resident which makes sure that the salary earned outside India on ship will not be taxable in India but you cannot claim non-resident status.

Another new Section 6(1A) has been inserted by Financial Act 2020 which is applicable beginning from the financial year 2020-21 (01st April 2020 to 31st March 2021). As per this new section, an individual, being a citizen of India, having a total income, other than the income from foreign sources, exceeding fifteen lakh rupees during the previous year shall be deemed to be resident in India in that previous year, if he is not liable to tax in any other country or territory by reason of his domicile or residence or any other criteria of similar nature (irrespective of the number of days in India)At the same time, another amendment has been inserted in Section 6(6) to consider the individual covered under above section 6(1A) as a resident but not ordinarily resident.

The plain reading of this section suggests that all the non-resident sea fearers are considered as resident Indians and their salary will be liable to tax as they are not paying tax in any other country. However, this is not the case. To clarify the applicability of this new section 6(1A), CBDT has issued a clarification via press release on 02 Feb 2020. As per this clarification, Section 6(1A) is an anti-abuse provision to cover those Indian citizens who shift their stay in low or no tax jurisdiction to avoid payment of tax in India. The new provision is not intended to cover those Indian citizens who are bonafide workers in other countries like in the Middle East as they are not liable to tax in these countries. Moreover, it is clarified that in case of an Indian citizen who becomes deemed resident of India under the section 6(1A), the income earned outside India by him shall not be taxed in India unless it is derived from an Indian business or profession.

So, the new section does not impact taxability of salary receipt by sea fearers and they will enjoy the benefit of tax-free salary as they have currently even they become resident but not ordinarily resident as per new Section 6(1A).

Also, a false news is circulated in various places that a seafarer is required to complete 8 months onboard to save tax on their merchant navy receipt which is not correct. This provision is applicable on the person who is visiting India not for a person who is leaving India for the purpose of employment. 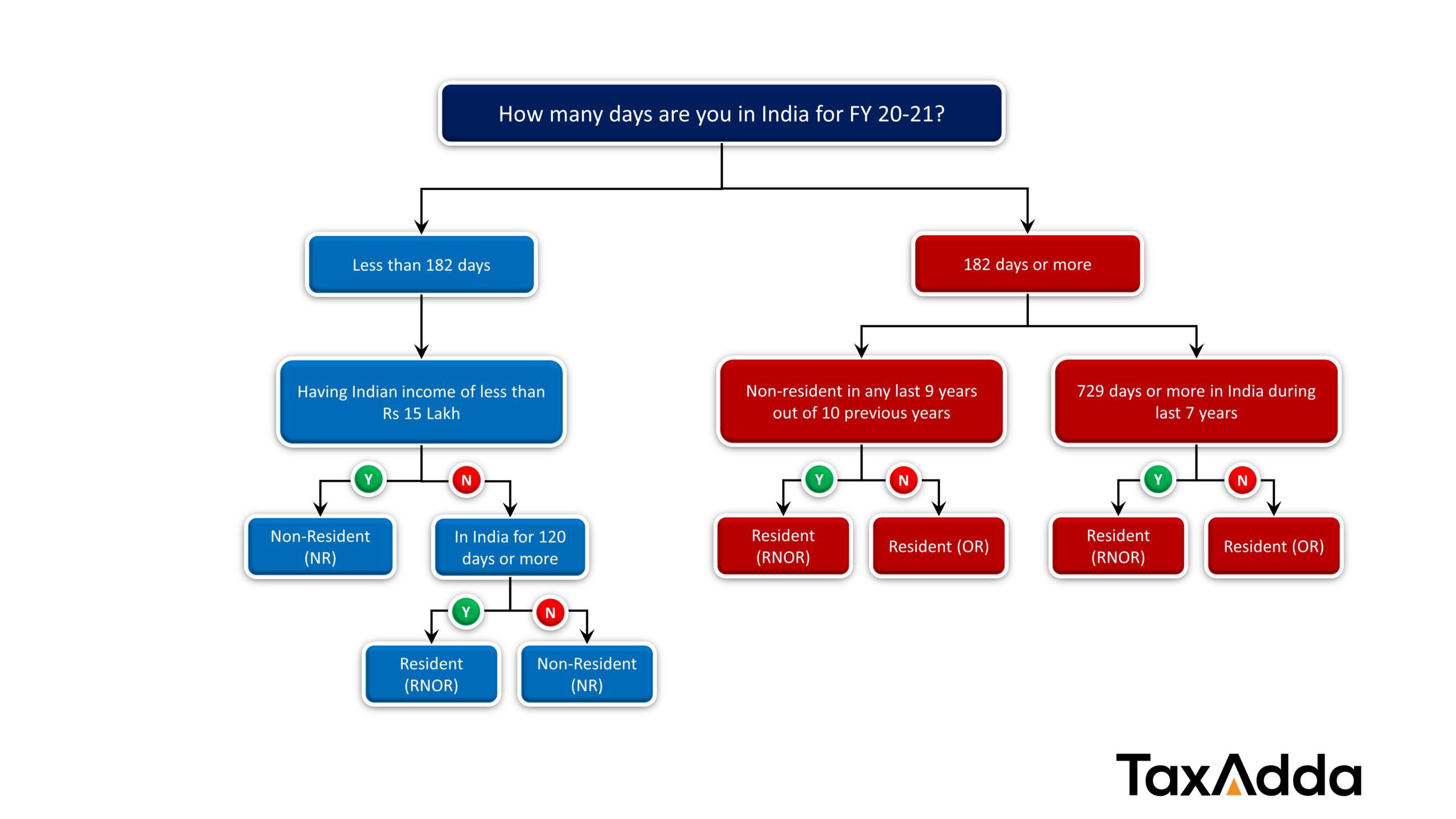 Various representation has been received that various individual who had come to visit India during the previous year 2019-20, were not able to leave India due to the outbreak of COVID-19 and declaration of lockdown. As they have to prolong their stay in India which result in genuine hardship as they may not be able to maintain their status as Non-Resident or Resident but not ordinarily resident.

(c) has departed on an evacuation flight on or before 31st March 2020, his period of stay in India from 22nd March 2020, to his date of departure shall not be taken into account.

Note – It is mentioned in the circular that is applicable for the person visiting India. No mention is available whether it is applicable to the person who was unable to leave India for the purpose of employment due to lockdown. As per our view, it should be applicable to seafarers. A similar circular will also be released for the financial year 20-21 as mentioned by the Income Tax Department in their tweet of 08th May 2020 depending on the normalization of/resumption of international flights.

Do Indian seafarers have to pay tax?

If you are outside India for more than 184 days (or 185 days in a leap year) as per your CDC/passport then you are not required to pay taxes on your merchant navy receipts.

Yes, if you are outside India for more than 184 days (or 185 days in a leap year) as per your CDC/passport then you are considered Non-Resident India under Income Tax Act 1961.

Which bank is best for seafarers?

You can have NRE/NRO account in any PSU or private banks like ICICI, Kotak Mahindra Bank, SBI etc.

What is the difference between NRO and NRE account?

Download free e-book on income tax applicability on seafarer for the FY 2019-20 along with the new changes made for FY 20-21 for free.

Taxability of Salary and Other Income for Seafarers

Type of Bank Accounts for Seafarers