Confused in complicated laws? Take our GST consultation services to get your issues solved from GST experts. Click here to know more.

A very common example of this is depreciation. For companies, depreciation rates to be considered in books of accounts are defined in companies act but while calculating Income Tax the depreciation will be allowed only as per rates given in Income Tax Act. Therefore, there is difference between income as per books and taxable income as per IT Act.

As you can see in above example the depreciation as per books is more for first 5 years but this difference in then reversing from the 6th year. A DTA or DTL is to be made only for such temporary difference which are to be reversed in future.

If the income as per books is more than taxable income then it means that we have paid less tax as per book’s income and we have to pay more tax in future and thus recorded as Deferred Tax Liability (DTL). Similarly if income as per books is less than taxable income then it means we have to paid more tax and has to pay less tax in future. So it will be a Deferred Tax Asset (DTA).

When the future benefits for which DTA is made is realised in future then the DTA is reversed and same for the DTL.

DTA and DTL is accounting treatment is covered in Accounting Standard 22. 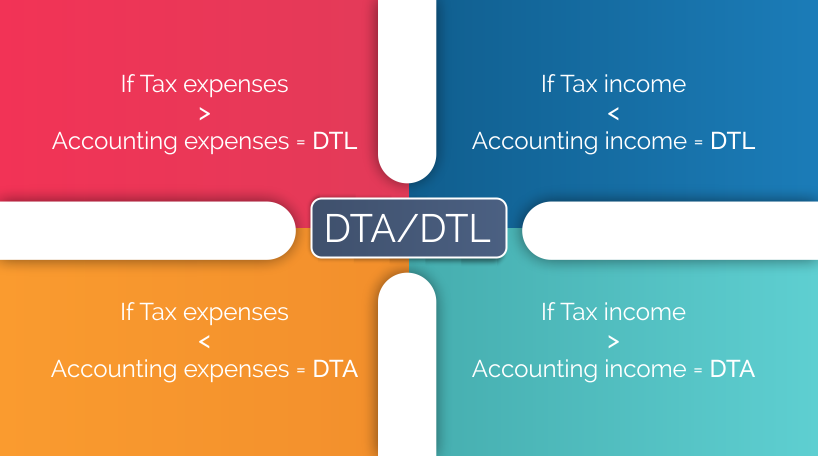 Let us consider a situation wherein the following details are provided :

Income as per the books of accounts of a company

Income as per Income tax authorities

This amount i.e. 60,000 will be termed as deferred tax asset (DTA). It will be adjusted in the books of accounts during one or more subsequent year(s).

References to Common conditions in which DTA, DTL arises

Calculation of DTA, DTL and its accounting treatment

Suppose we consider the following situation :

Company XYZ ltd. purchases a Machine at a cost of Rs.2,00,000 on 1st April 20XX with an useful life of two years and has NIL scrap value. However, the said machine is eligible for 100% depreciation allowance for taxation purpose in the first year. Company closes its accounts every year on 31st March. The company follows SLM method for computing depreciation. Profit before tax and depreciation is Rs.5,00,000 each year and tax rate is 30% each year.

The accounting treatment in the given case will be done as under :

In 20X1, excess depreciation allowed for taxation purpose is Rs.100000 due to which accounting profit is different from the taxable profit. This has resulted in Deferred tax liability amounting to Rs.30000. In 20X2, no depreciation is allowed as per tax while the depreciation charged in books is Rs.100000 due to which Taxable profit exceeds accounting profit by Rs.1,00,000. Accordingly, the deferred tax liability created earlier has been reversed in this year.

Following journal entries would be passed :

You can also calculate DTA/DTL using this calculator.

Since DTA and DTL are made for the future benefit or future liability, if there is a change in tax rate then the new rates should be considered for calculating the deferred tax asset or deferred tax liability.

Presentation in the balance sheet and other points worth noting

What is Overdraft (OD) and Cash Credit (CC) & Difference Between Them